Samurai “He who serves”

The Samurais came from the “Saburais” guards who practiced martial arts and who assisted the tax collectors. In the beginning, this group of warriors were merely “servants” of the emperor or high major clans. But by increasing their strength through the many victories they achieved, they obtained a new status.

In the 11th century there arose the first samurai dominating government. The Samurai had a different face. They were both trained military and literary. The pen was as valuable as the sword and so arose the Japanese pronunciation; “BUN BU RYO DO what to say,. As the calligraphy and swordsmanship perfectly mastered, more people will understand the concept behind the Japanese culture A samurai mastered the perfect balance..

Bushido is the code of moral principles who knew the Japanese Samurai fighter. It literally means “the way of the warrior.”

The principles include loyalty, mastery of martial arts and honor.

Should any Samurai warrior lost his honor, often opted for a ritual suicide, which they know as “Seppuku or Harakiri” to restore lost honor as capital gains.

A key code was “Free yourself from fear” and all times will not earned a victory.

The Samurai sword is still known for its beauty and functionality. Once considered as the soul of the warrior. If we go to war took one usually with two swords.

The Katana and Wakizashi. Together Daisho were called.

The year 1868 marked the end of this beautiful samurai culture by introducing a modern army and carrying AA katana was banned.

However, the magic around these brave warriors to date still to be found anywhere in the world. The Samurai remains a major source of inspiration for stories and movies. The imposing swords and costumes still speak to our imagination.

We sell handmade samurai costumes recently imported from Japan. With great professionalism made and manufactured in the original way, similar to the Samurai armor from earlier times.

Harnesses actual size, especially recommended for decoration in shops and restaurants, Sushi Bars. Especially concerns ‘artwork’ What guarantees an impressive eye-catcher will be for young and old. 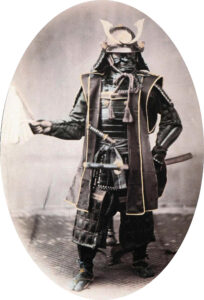